Installing from a stock ISO, I came up against the error that “one or more disks have the same UUID” – this was after installing successfully and rebooting. Using the boot parameter “overrideDuplicateImageDetection” I was able to boot and use the vsphere client – this showed that both disks were visible to ESXi and were not being presented as a single logical drive.

After much wailing and gnashing of teeth and references to the controller not being supported, I came across a post suggesting that VMware has custom images. Indeed, I found the below:

Lo and behold, we now have a single logical drive instead of 2 separate ones: 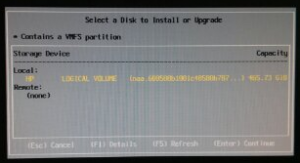