This became an issue due to an old Dell Poweredge 750 Server which we were trying to build into a simple SAN. The long and the short of it was that we needed to upgrade the BIOS to A06 (which can be found here). The BIOS is installable via floppy (no floppy drives), Red Hat Linux (tried, installer didn’t work) and Windows (Oh no, really?Can’t we just have a bootable iso image?).

OK then, let’s install XP. Hang on, it doesn’t include SATA drivers and the BIOS doesn’t do AHCI – we need to customise an XP iso. Sod that.

OK, let’s install Windows 7 then. Hang on, there’s only a CD drive in the 750. Hmm. Wait! We have a USB DVD drive! Load it in, no joy. Apparently some BIOSes don’t play with the UDF file system in the DVD. This was annoying so we gave it some further thought.

Google came up with the following – Customising a Windows Install ISO – which is a very good technical explanation of the whys and whatnots of the boot sectors and how to convert the UDF system to an ISO conforming to Joliet / ISO 9660 using Linux. I didn’t have a Linux machine handy and needed a quick fix so after reading the article I reckoned I could do it quicker with PowerISO. And it works a treat with minimum fuss:

1) Open the Windows 7 DVD image in PowerISO and go to File -> Image Properties, you will see the following: 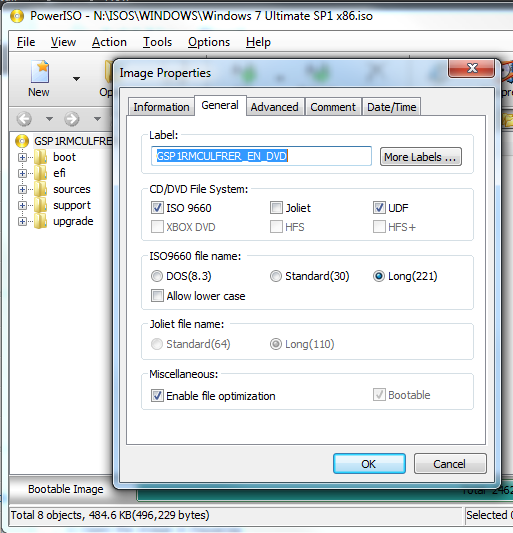 2) De-select UDF and select Joliet, making sure you have long filenames selected in the settings below:

3) Save the image, burn to DVD, insert in the USB DVD-Rom and install! Simples!